The main purpose of contactors is to connect, switch on and disconnect the current in electrical circuits and devices under normal conditions and electrical loads. The most common contactors are electromagnetic. They consist of main and auxiliary terminals, a coil, a casing, a magnetic core and an arc quenching device. Nowadays there is a broad and varied range of types of contactors available on the market, each with its own features and distinctive characteristics. See below for information about the main contactor ranges available in ElmarkStore's online shop and how they differ from one another. In addition, you will find useful information about contactors as a product category and accessories to enhance their performance. 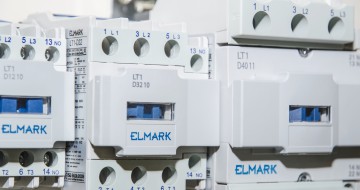 Contactors generally operate with the movable part of the magnetic core (also called the anchor). The anchor is in a state of rest until an electric current flows into the electromagnet windings. This generates an electromagnetic force that acts against the springs that hold the anchor in its starting (rest) position. The anchor moves until it strikes the end stop or the pole of the stationary part of the magnetic core. This anchor movement drives the movable terminals of the contact system. 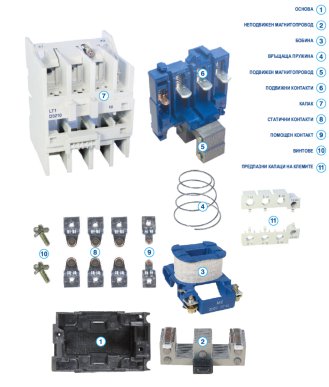 You need to be aware of a few basic terms to better understand the contactor operating mechanism and to make an adequate choice of products in this category. The contactor system consists of movable and stationary terminals. The difference is that the movable terminals are connected to the anchor which moves them. Individual terminals in the contactor can be normally open or normally closed. This classification is based on their initial state (i.e. their state when there is no current in the contactor coil).

Characteristics and parameters of contactors

More useful information about the most important contactor characteristics and parameters is set out below:
- номинален ток, измерван в ампери (A)
- rated current measured in amperes (A)
- rated operating voltage of the coil up to 50/60Hz (V АС)
- mechanical and electrical wear resistance (or the operating life of the contactor mechanism, measured in the number of switching cycles).
- supply voltage and power consumption from the windings of the drive electromagnet.

Contactors on the mass market are tripolar. However, some manufacturers also include unipolar, bipolar and quadripolar contactors in their product ranges. With regard to rated current, which in practice is one of the main criteria for the choice of a contactor, certain values are observed by almost all manufacturers. In general, the most commonly available contactors on the market have a rated current of 6 A to 630 A and coil voltages from 12 V to 400 V. Contactors with a greater or lesser rated current can only be made to order. LT1 - D and LT1 - HK contactors: these AC contactor ranges are designed to control circuits operating in utilisation class AC3 and with a rated current of up to 95 A. The main functions of LT1-D and LT1-HK contactors are to switch electrical circuits on and off when under load, to set up control systems, to be used as an operating component in controlling electrical switchboards and to provide a secure cover for the moving parts. LT1-D and LT1-HK series contactors are connected to flexible conductors with or without cable ends and to rigid conductors. What are contactors themselves made of? Their coil is made of pure QA-1 grade copper, the magnetic core is in 360 alloy steel and the movable part is made of bakelite. Note also that contactors are resistant to ultraviolet radiation and extremely low and high temperatures and are non-combustible. 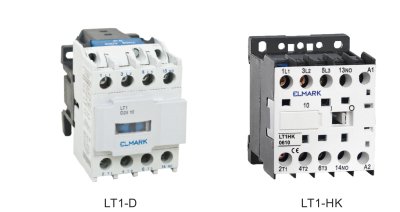 LT1-F contactors: this range of AC contactors is suitable for use with a 115A to 800A power supply. As usual, their functions include controlling AC circuits and consumers in normal operating mode and in a contaminated environment and implementing consumer management systems in operating conditions that involve frequently switching electrical circuits on and off when under load. They can be connected to flexible conductors with or without a cable shoe or to rigid conductors. LT1-F series contactors are made of materials that do not deform under the influence of ultraviolet radiation or different temperature ranges.

LP1-D contactors control AC consumers with a DC coil. Their power terminals are designed for the control of AC circuits in high-pollution environments with the power frequently switched on and off. The main functions of LP1-D series contactors involve switching AC consumers on and off in DC power control systems, building power consumption control systems, reliably separating individual power outlets, etc. Like all ranges of contactors listed above, LP1-D is also made of durable materials that do not deform under the influence of the most common external factors. They are available with rated current values ranging from 9A to 225A. CJ19-43 contactors are specially designed for commutation of three-phase capacitors used for power correction. These contactors are a suitable choice for capacitors of up to 50 kVAR. Their main functions are as follows: switching capacitor banks on and off for reactive power compensation; setting up compensation systems for the reactive energy component; lowering peak transitional current when switching the capacitor on and off; reliably disconnecting power terminals; and preventing manual operation. They can be connected to both flexible conductors with or without cable ends and to rigid conductors. Available with rated current values from 32A to 170A.

LT4-DXX contactors are suitable for starting and reversing three-phase squirrel cage and slip ring motors across the line. Contactors in this range are rated at up to 95 A. Their main functions and properties are as follows: switching electric motors on in one rotation direction and subsequently reversing the rotation direction by an outside command; setting up control systems; reliably switching on or disconnecting power terminals; and ensuring a mechanical locking system to prevent two contactors in the group from being switched on at the same time. LT4-DXX series contactors can be connected to flexible and rigid conductors. They are made of reliable materials that ensure that they are kept in good condition for a long time.

K series module contactors are designed for switching single-phase and three-phase low power electrical consumers. These contactors operate in complete silence and are mounted on DIN rails. They usually have rated current values ranging from 20A to 100A. Their functions include switching consumers on and off, setting up control systems and reliably switching on or disconnecting power terminals. Switching takes place with flexible conductors with or without cable ends and with rigid conductors. These products do not deform under the influence of ultraviolet radiation or large temperature ranges and are made of non-combustible materials. Additional equipment and accessories for contactors

Extra equipment and accessories are available to increase the performance of contactors and improve their properties and functions. The following equipment and accessories are available at the ELMARK online shop:
- contactors: time delay contact block: firstly, time delay contact blocks are used to set intervals of 0.1 to 180 seconds in different control circuits. They are usually combined with LT1-Dxx series contactors to create star-delta type starters for controlling electric motors.

- contactors: thermal overload relays in the LT 2-K/Exx range are tripolar relays used to protect asynchronous motors from overloading or overheating. They are mounted on LT 1K/Dxx series contactors. The main functions of thermal overload relays include switching off AC consumers in the event of overload, setting up control systems and acting as a protected operating component in asynchronous motor control panels.

The ELMARK online shop has different ranges of contactors along with the accompanying equipment and accessories that will meet all your requirements..

Characteristics and parameters of contactors

Additional equipment and accessories for contactors

Filter
Sort by:
Items per page: